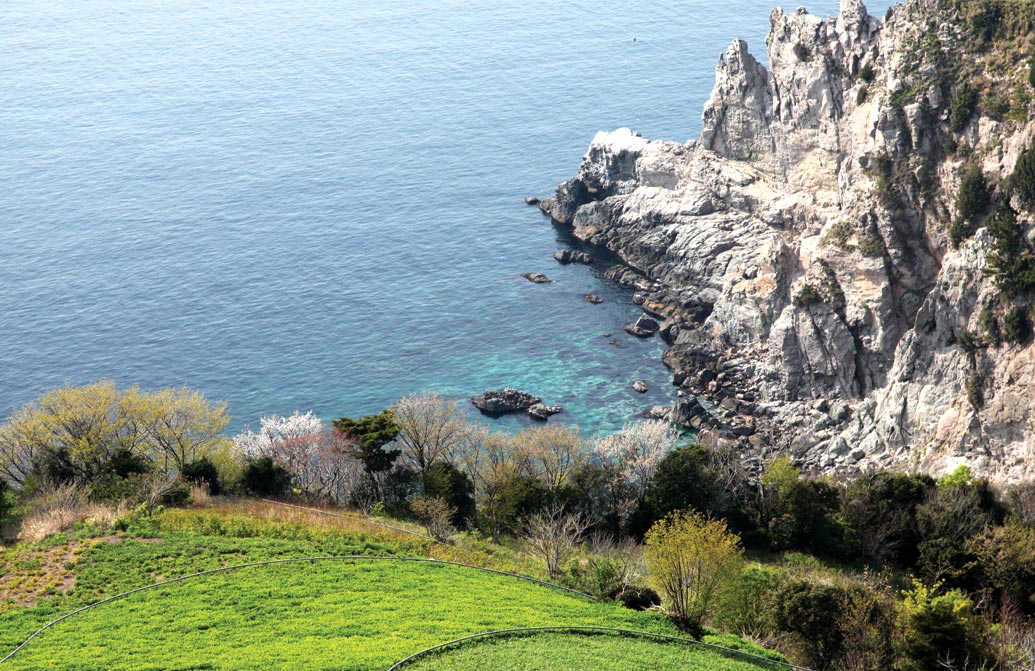 Ulleungdo, shrouded in ancient mysteries, is a natural island, which is hard even to visit during seasons other than spring because it always rains or snows. In effect, other islands, which are considered among the top 10 islands in Korea, besides Jejudo and Ulleungdo, are all connected with the land through bridges, making them highly accessible. 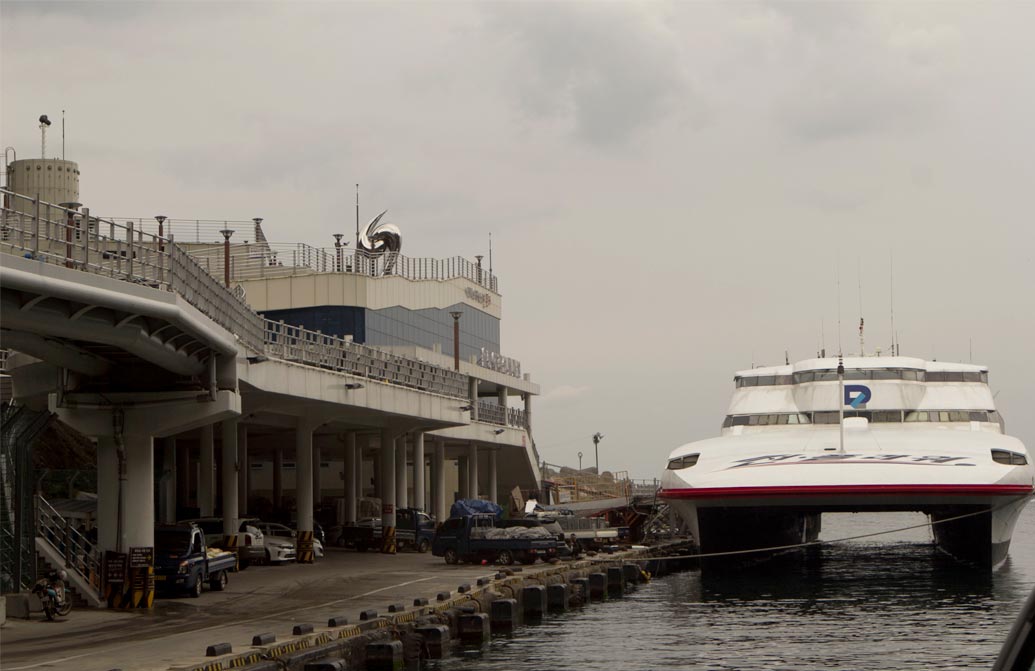 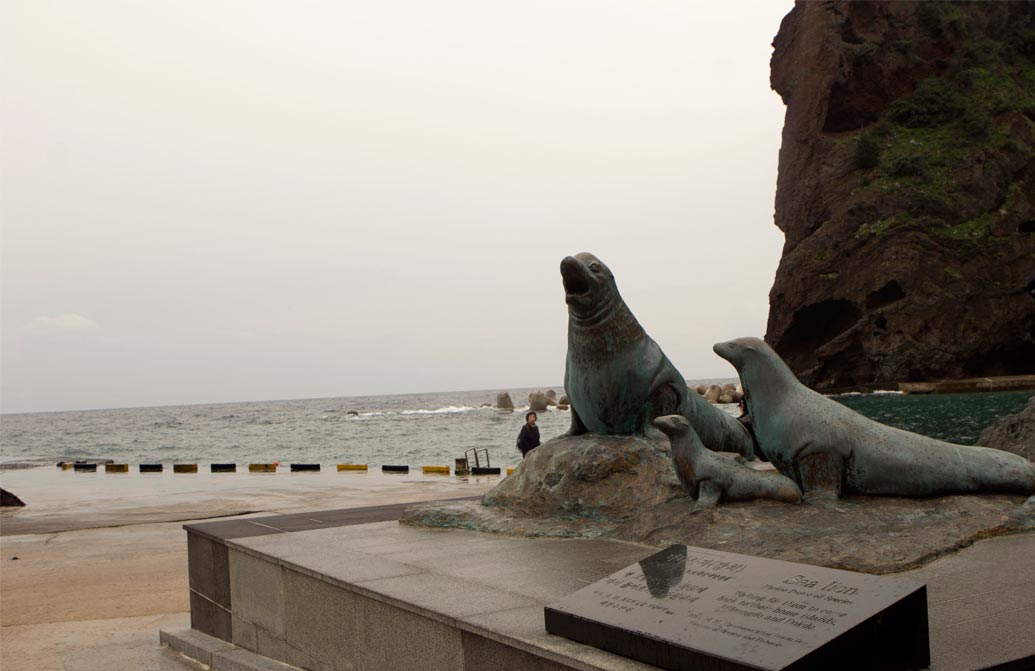 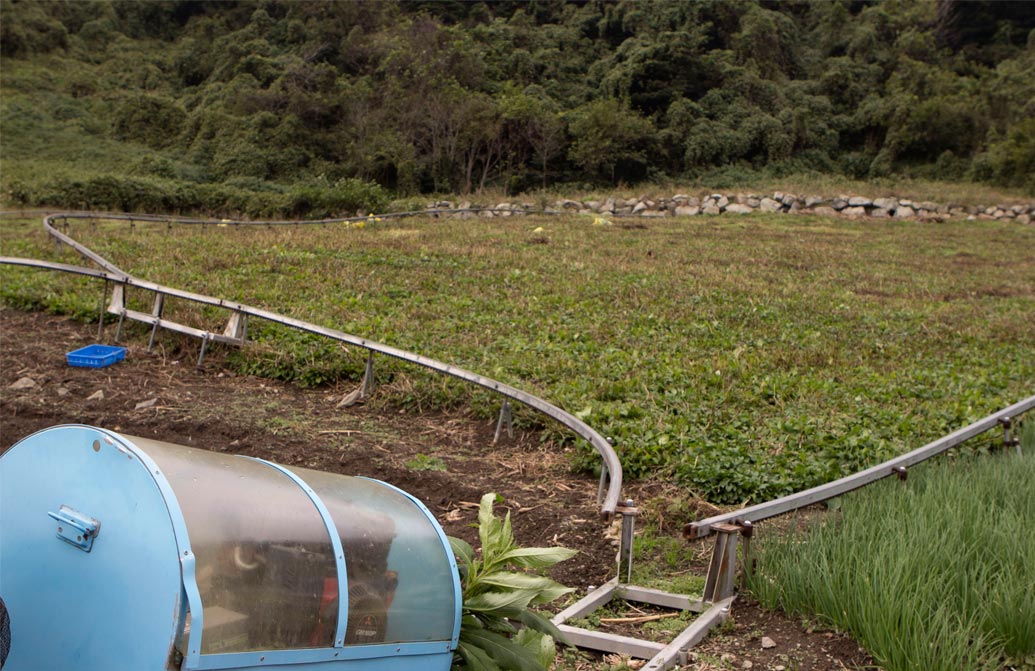 It is not uncommon for the ships to remain at port each time that waves become high, so you can find yourself getting anxious until your ship actually departs for the island. It was lucky for us to visit Ulleungdo last November and stay for 3 days there as scheduled. The rather inconvenient traffic and geographic environment are what keep the environment of Ulleungdo intact, which means the inherent nature and native food ingredients are preserved. Farmland in Ulleungdo often comes with an inclination of 35 degrees. Interestingly, agricultural monorails with a maximum capacity of 500kg are installed here and there for the elderly farmers to manage their farming work with relative ease.

Three years ago, Ulleung-gun established the Slow Food Basic Plan aiming to preserve the life resources of Ulleungdo as tourism industry and, starting from this, Slow Food Korea set up the campaign such as ‘Ulleungdo’s Natural Dining Table’ to introduce the taste and nature of Ulleungdo and what the hidden exquisite beauty is all about. Interesting ingredients that grow naturally are abound on Ulleungdo, including Ulleungdo turk’s cap lily, striped ox, clear rice wine made of corn taffy, Pacific saury, Ulleung red potato, etc.

In 1883, 54 persons from 16 families moved into Ulleungdo under the order of King Gojong, which makes it the 133th year since people started living on the island. Ulleungdo is an island made of a single peak, which makes it extremely hard to find a flat area. Nari Basin is the only even area where people gathered to form a village. Nari Basin came from the name ‘nari flower,’ a colony of lilies covering the whole area. In the early reclamation stage, the settlers managed to dig up the roots of the turk’s cap lilies to eat. Ulleungdo residents call the turk’s cap lily as tiger lily and the rest of the lily types of which roots are inedible are referred to as wild lily. Now, the number diminished so that you can only see the turk’s cap lilies only when you climb up Seonginbong Peak. People say the turk’s cap lilies are rare as more food and ingredients become available to be randomly picked up and taken off of the island while the area is reclaimed to be farmland. 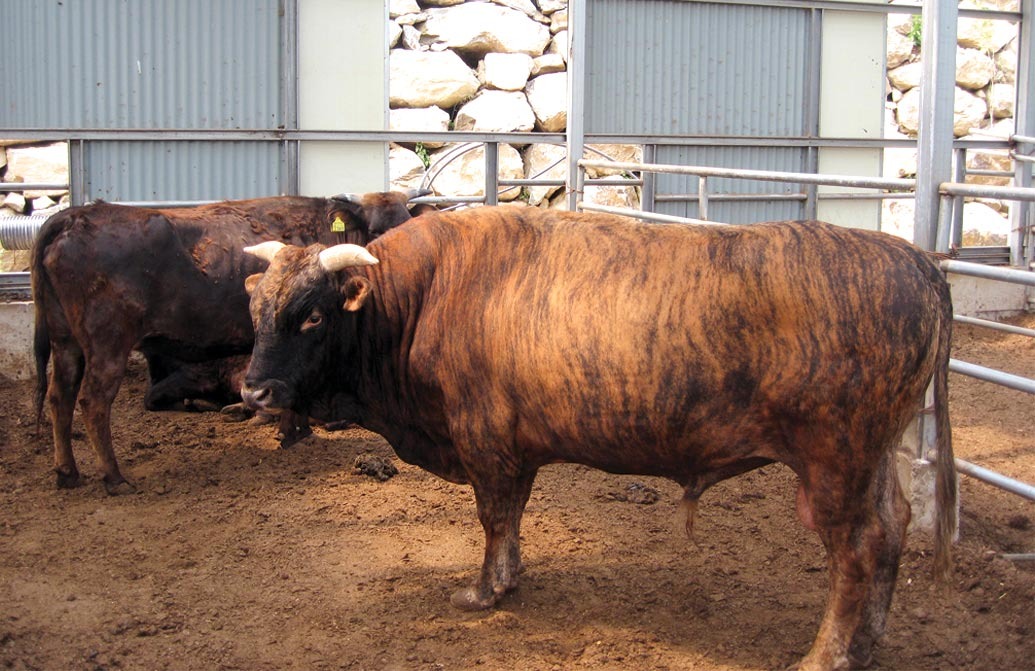 Striped ox (“Chikso” in Korean) is a type of Korean native cattle that is even depicted in the Goguryeo mural. There were multiple types of cattle in on the Korea peninsula but the currently available ones amount to four including yellow cattle (“Hwangwoo”), striped ox, Jeju black bull (“Heugwoo”), and black bull. Other than the yellow cattle, the rest are nearly endangered species because the overall policy was to focus on cultivating yellow cattle from the Japanese imperialism era until today. Recently, more efforts were made to reclaim other types and now the number of striped ox amount to nearly 15,000 across the country. Of them, about 400 striped oxen are found on Ulleungdo.
Ulleungdo started breeding striped oxen from 2006 as the region’s specialty item and that’s what made the island become known as the origin of striped ox. Normally, they are more expensive than yellow cattle by about 30% – 50% and there is a reason to be so because they taste great. Generally, the oxen with black fur like striped oxen tend to have higher content in unsaturated fatty acid, which means that their melting point is low to melt better and taste better.
Oxen on Ulleungdo have long been referred to as ‘medicinal oxen,’ which means they were bred eating Manchurian angelica and Amur wallflowers, which are a dime a dozen on the island. In addition, keeping the striped ox pedigree alive is to preserve the nature of Ulleungdo. 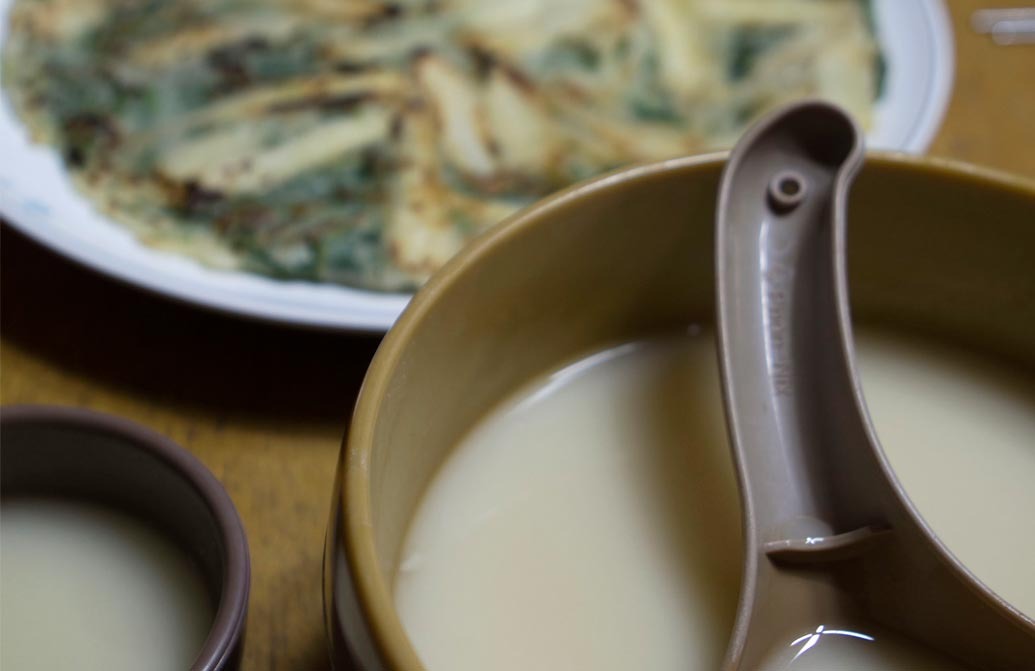 There is a line in ‘Ulleungdo Arirang’ – “I borrowed a lump of black goat meat and clear rice wine made of corn taffy. I was so bored to have them all alone and the lady in the mountain furrow cajoles me. Arirang-arirang-arariyo. Send me over to the Arirang hill.”
There is no country or region without liquor. Liquor reflects the representative taste based on the region’s ecology and culture. Residents on Ulleungdo would use corn to cook rice and make makgeolli (rice wine) and cheongju (clear rice wine) as rice was rare. As they get to import rice and soju from the land, the native corn in thick golden color and clear rice wine made of corn taffy disappeared into history.
For one, the seed’s peel liquor which is available anywhere across the Nari Basin is an upgraded version of the clear rice wine made of corn taffy (made by a private manufacturer). It tastes sweet, mild and gentle. This is how this wine is made – you shake off the corn kernels, grind them in a millstone or grinder and let it soak in water for a night. Then, you cook corn porridge, mix it with the malt, and keep boiling down until it shrinks to two-thirds. Cool it for a while and put yeast in it to make liquor. It depends on the season but it takes more or less 10 days to complete.

Rare and precious fish in the sea – Ulleungdo Pacific saury

Pacific saury would gather at the seaweed when they reach the spawning season and rub their bodies on other objects to spawn. The Pacific saury fishing is based on their spawning propensity as you let the seaweed float around the spawning ground, wait for them to gather to spawn by dipping your hands there, and, when they do, scoop them all with both of your hands. They tend to be mistaken by thinking your fingers are seaweed so they start rubbing their body across your fingers and that’s when you catch them. Pacific saury caught this way taste far better than those caught in the net because they would be less scarred because human hands are soft. Moreover, nothing could be eco-friendlier than this method. As you can see, you should consider the seed, food, and farming/fishing method altogether to obtain the premium taste.
Statistics already indicated 6 years ago that the Pacific saury catch dropped by 94%. They are one of the most affordable kinds of fish for consumers and catching them in the bulk fishing method left only a few now. You can no longer see them on Ulleungdo but those caught in the drift gill net or set net are made for cold raw fish soup. 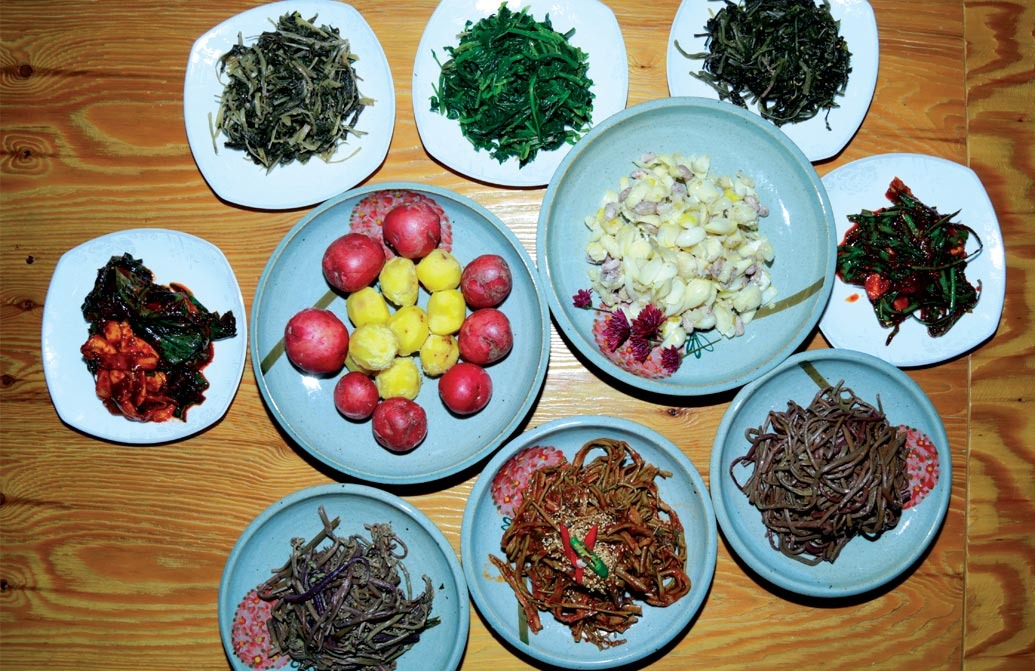 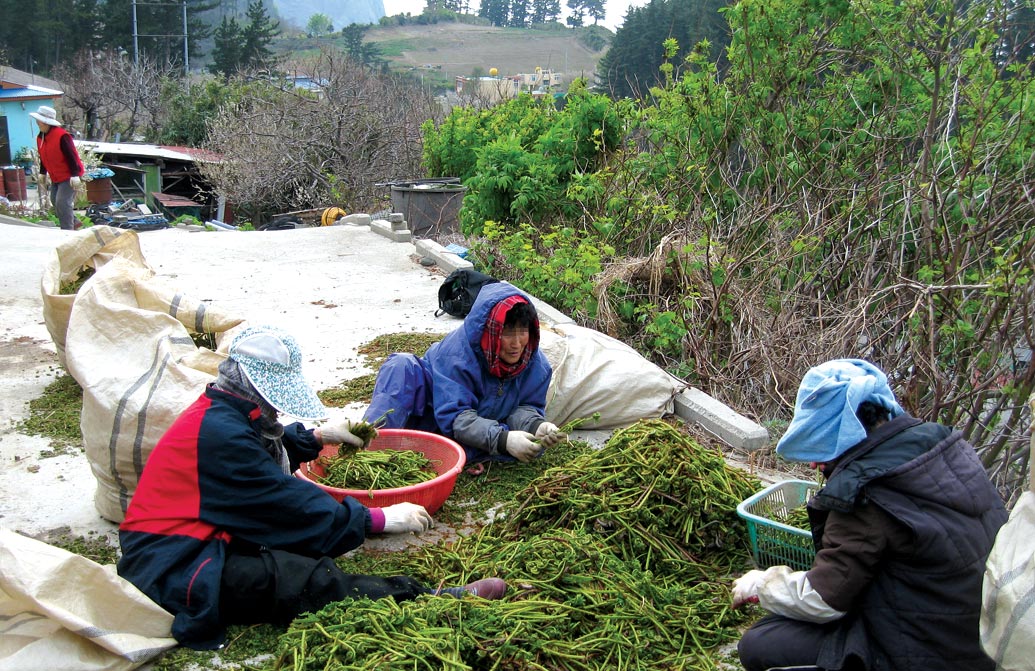 Wild herbs and vegetables on Ulleungdo boast of various colors and tastes as they grow on the island. However, it is increasingly hard to farm those herbs and vegetables here; the farmland inclination is too steep and there is no young generation to follow the predecessors. The cooperative unit that produces the herbs and vegetables on Ulleungdo including turk’s cap lily, togaribameshida, Aruncus dioicus, broadleaf chives etc. was selected as the Presidia by Slow Food Korea in May 2014 to get the support from nearly 150 countries and 100,000 Slow Food members’ network.
Specifically, for consumer to eat well is helping to produce quality foods’. There is an old saying in Korea that goes “sanjin-haemi (exotic delicacies),” which means you make food with a variety of rare and precious ingredients from mountains and the sea. Ulleungdo is a mountain and sea, in itself. The island may not be the most industrialized region but that explains the well-preserved state of mountain, sea and an ample amount of life varieties.

You sit on the dining table on Ulleungdo and you’ll instantly get an idea of its mountains by the sea. Even the wild vegetables, seafood and fish from Ulleungdo, which are now common these days, are actually the most precious ingredients. We enjoy such rare and precious food raised and harvested from Korea with ease thanks to the Ulleungdo farmers’ dedication. The mission to keep sanchae growing as they are on Ulleungdo and rare marine plants alive under the sea is to keep our original taste and the flavor of life. Protecting the “slow food” of Ulleungdo is a mission for all of us consumers. 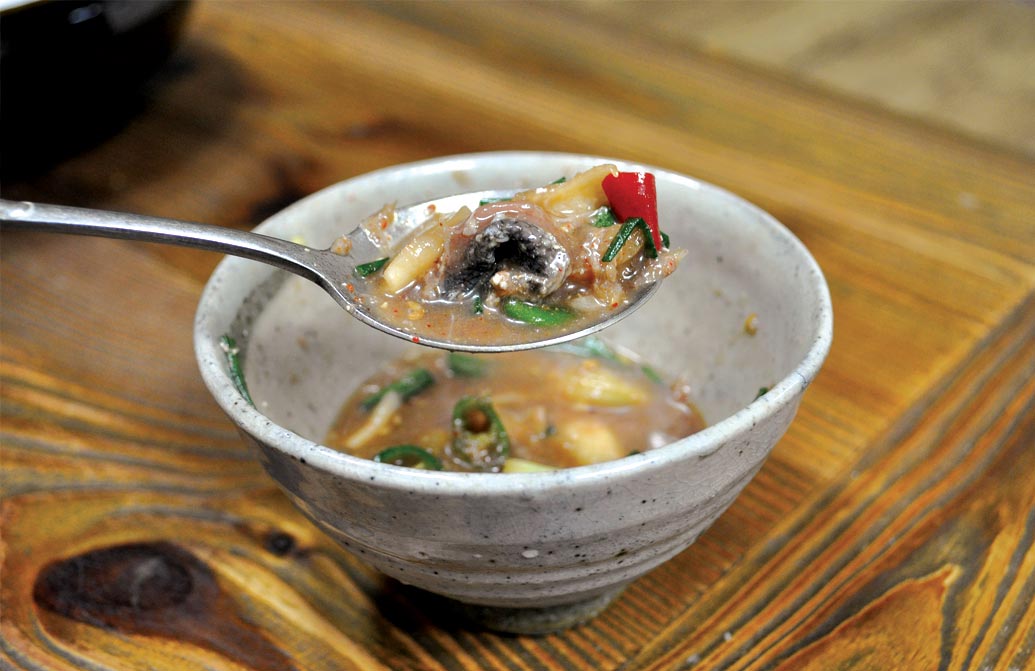 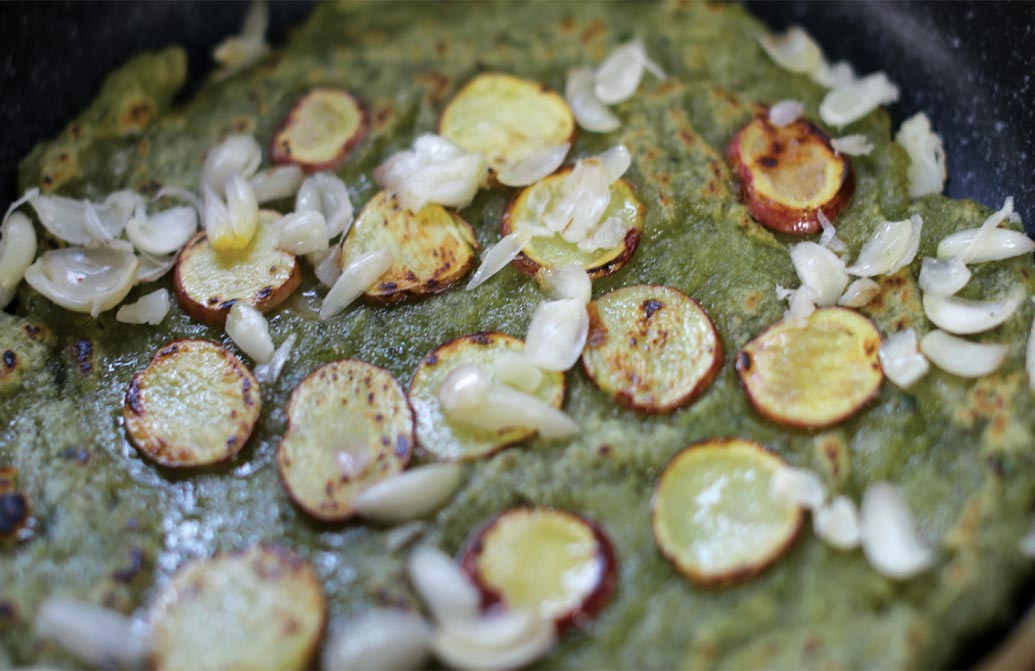 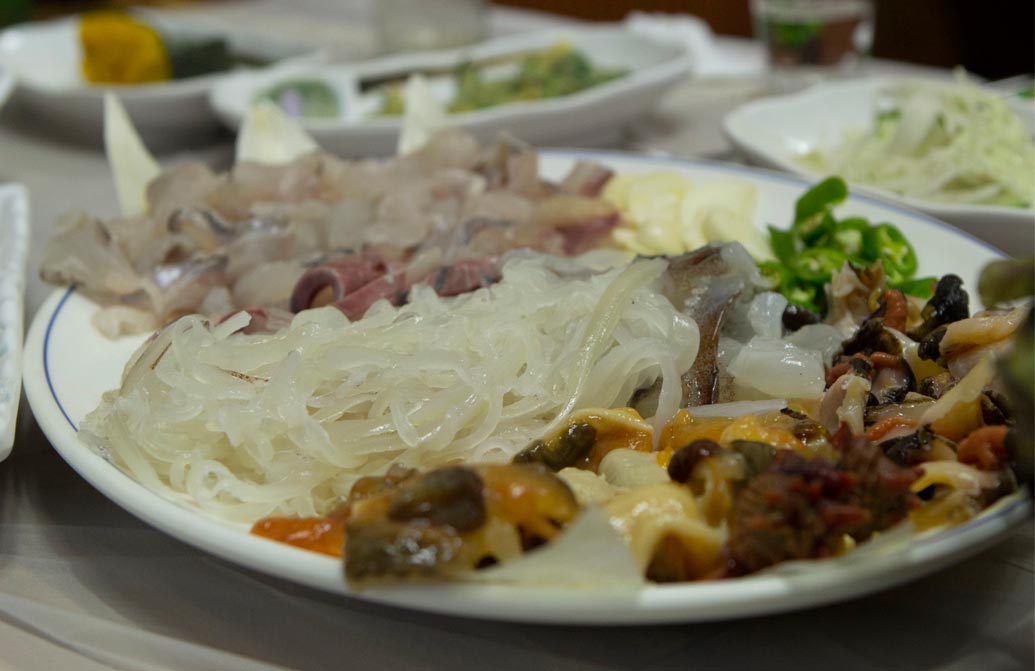 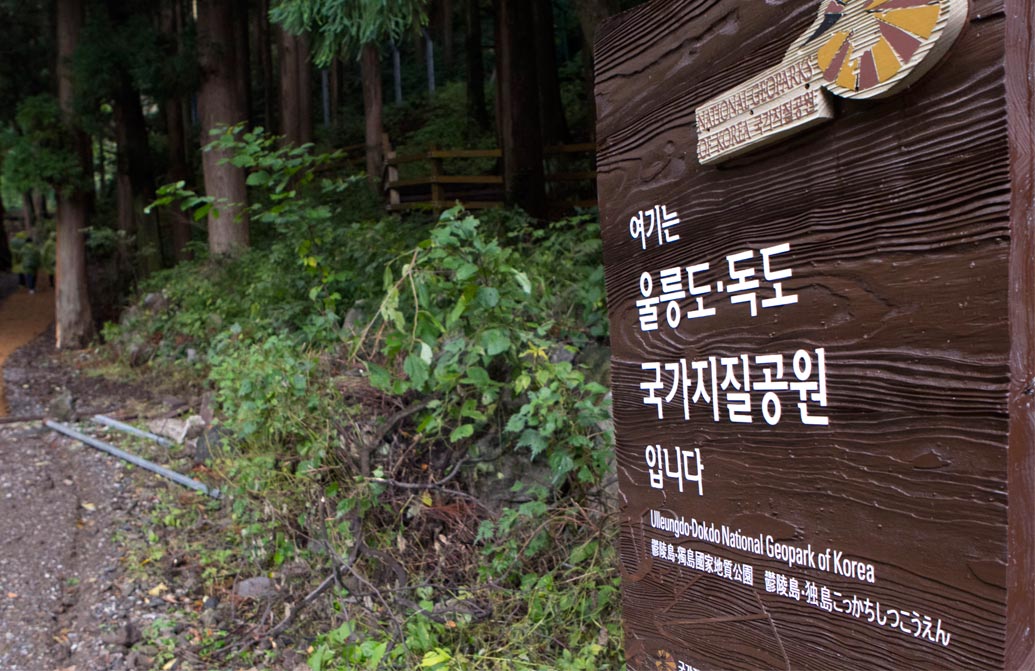 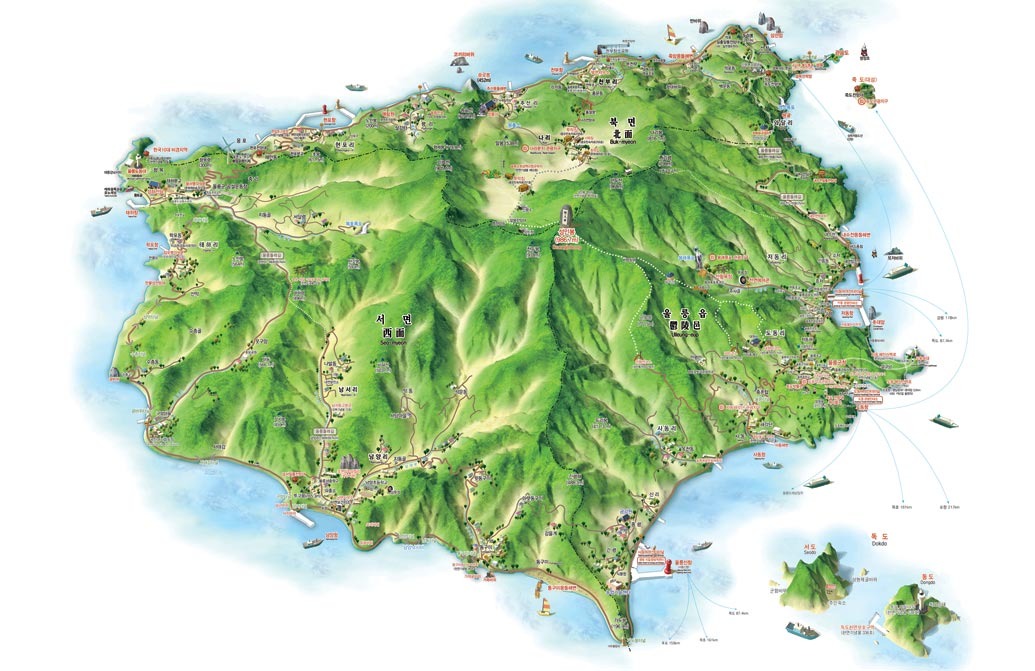